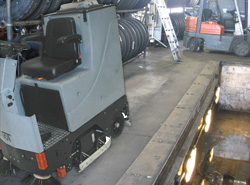 Several years ago American Tire Distribution who has over 80 distribution centers in North America were looking for a way to keep down the dust in their facilities. Not only were the floors dirty but they also had lots of dust on their product as well as dust being in the air that was a safety concern for the employees. Tomcat rider floor scrubbers were the perfect solution. The cylindrical scrub system that sweeps and scrubs at the same time along with the side brooms that allows them to sweep and scrub along the racking and the edges allows them to take care of their dust problem. Initially they purchased a couple of Tomcat 350 rider scrubbers to see if it was going to solve their problem. Since then they have purchased dozens of Tomcat rider scrubbers, some of the rider scrubber models include the Tomcat 350, 290, 250, GTX and XR rider scrubbers. They continue to be very satisfied with the performance and ease of use. They have noticed a significant reduction in dust and have found their customers and employees more satisfied with their new level of cleanliness. 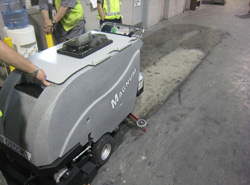 I wanted to send along some photos of what the Magnum cylindrical walk behind floor scrubber was capable of cleaning on a demonstration yesterday. The facility we demonstrated in manufactures dry chemicals and the primary concern was in the resin department where the goopy mess has hardened where it was dropped. The combination of the 250 pounds of down pressure and aggressive brushes on the cylindrical scrubber were the right combination to aggressively clean the grimy filth off the densified concrete floor and leave a nice white path behind. The picture speaks for itself...

School Back in Session 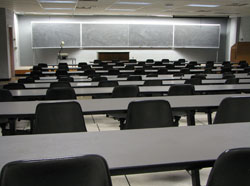 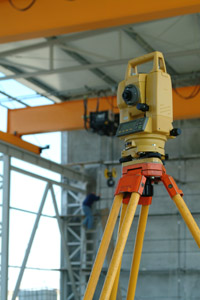 A contractor from Atlanta was getting tired of their equipment constantly breaking down, specifically their walk behind scrubbers. They had several pieces of equipment but most of the fleet was walk behind scrubbers. They would scrub several stores a night, taking their scrubbers on and off of trailers several times. Being frustrated, the owner began his search for the most industrial piece of cleaning equipment he could find.

When he looked at the Tomcat Minimag walk behind scrubber, he was very impressed with the accessibility of everything if he needed to replace parts. The overall ruggedness and durability of the Tomcat Minimag scrubber convinced him to purchase one for his guys to try. Almost 2 years later, he is perhaps one of Tomcat's biggest fans and would not consider purchasing any other floor scrubber other than that of Tomcat. Tomcat's cleaning equipment has been able to help him cut his costs in repair bills considerably. Their customers have been much more satisfied, since they can count on a Tomcat floor scrubber that will be cleaning their floor every night and not a competitor machine that is in the shop with costly repairs. 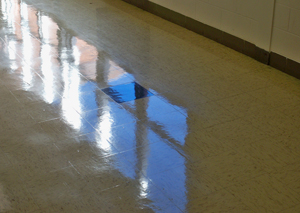 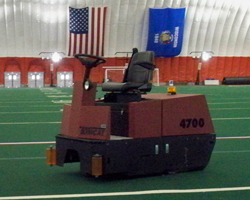 One of Wisconsin's premiere Indoor/outdoor water parks and family activity centers has a 100,000 square foot indoor sports facility covered in artificial turf. They had contacted us to see if our sweepers could clean the turf, as their current two rider sweepers were not doing a satisfactory job. Their sweepers were leaving behind much of the small fuzz, string, and wrappers. Operators also complained that it required 2 Rider Sweepers to clean the floor in an acceptable time. We showed them the mid-sized Tomcat 4700 rider sweeper. As hoped, the Tomcat 4700 battery sweeper performed flawlessly, picking up everything off the turf in one full speed path. Some key points the customer was looking for in a rider sweeper that the Tomcat 4700 sweeper achieved was, durability, performance, ability to modify the machine to accommodate soft turf flooring, and superior run time.

Sometime after the success of the Tomcat 4700 Rider sweeper at this Resort, they had contacted us again for an area they were having trouble cleaning. Their indoor water park deck surface was not getting as clean as they would like. Their current machine, a 32" Cylindrical battery scrubber, was lacking the down pressure and squeegee pickup required to clean textured and stained concrete. The Tomcat Magnum 27 cylindrical automatic scrubber with our scrubbing brushes was the only machine that was able to scrub the floor in one pass. What the customer liked over their current scrubbers was, Superior scrubbing, Simplicity and heavy build construction, ease of cleaning the machine, one pass results, and a Dry floor, which reduces the potential of slips and falls in the water park. 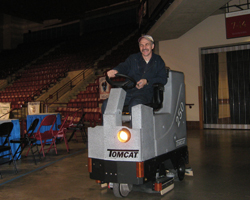 Roughly five years ago I was introduced to the janitorial staff at one of Ohio's premier Sports Arenas, on the campus of a major University. The janitorial staff had been using commercial walk behind scrubbers and an inexpensive rider scrubber with not much of a fan following. Recent demonstrations on new alternative rider scrubbers had left their engineers less than impressed with the commercial floor scrubbers available and their construction. That all changed when the Tomcat riding floor scrubber came to demonstrate its industrial build quality which was more than the engineers and floor crew had expected in this commercial environment. At the end of the trials the Tomcat GTX automatic scrubber was purchased and thousands of hours later it is still the preferred scrubber for the janitorial staff.

Six months after the initial GTX riding scrubber was delivered from Tomcat, we were once again given an opportunity to compete against some larger Propane Sweeper/Scrubber. Even though the Tomcat riding floor scrubber didn't have an internal combustion engine, the industrial build quality and the maneuverability of this battery scrubber once again won the favor of the janitorial staff. Tomcat commercial equipment was awarded the business with its ruggedly built floor scrubber for thousands less than the bulky and higher priced competitors' scrubbers. The combination of a more maneuverable floor machine for less money and a much smaller carbon footprint made the Tomcat riding floor scrubber was a better solution to the customers' floor cleaning needs. The janitorial staff at the Sports Arena has only a few hours in some cases to clean their large public events center between different acts, having reliable and efficient battery powered floor scrubbers is at the top of the priority list. They trust the Tomcat line of commercial cleaning equipment with their reputation, and others should too.

No crying over spilt beer. 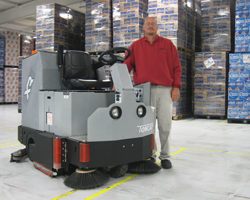 A large beer distributor located in the heart of Ohio recently took ownership of a Tomcat XR riding scrubber to replace their older riding scrubber. They are a fast paced and high volume beverage distributor and the prior rider scrubber was down for repairs too frequently. The beer distributor needed a high volume and productive floor scrubber to quickly clean their 85,000 square foot facility. The 68 gallon tanks on the Tomcat XR cylindrical scrubber coupled with a 40" cleaning path looked like true value to the beverage distributor, especially given the ability to sweep and scrub in a single pass. Adding on-board soap with a Green certification only added to the Tomcat auto scrubber's value as a safe, effective, and efficient floor cleaning machine.

The Tomcat XR riding cylindrical floor scrubber has been serving in this particular beer distributor for quite a while now helping to scrub their facility in record time, clean black tire marks left by the forklifts, and safely deliver floor cleaning chemicals without risk to the operator. Even though this globally recognized beer distributor has a national agreement with another brand, they saw better value by purchasing The Tomcat XR cylindrical scrubber. 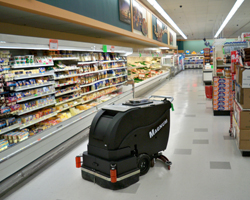 A national grocery retailer recently made the switch to the Tomcat line of floor scrubbers, choosing our battery scrubbers over the auto scrubbers offered by all other major. This specialty grocery store chain chose Tomcat walk behind auto scrubbers due to value added options and specifications built in to their American Made Tomcat MiniMag 26" disk walk behind scrubber. The open and accessible recovery tank, over sized motors, manager lockout keys, solid tires and overall rugged construction of the Tomcat battery scrubbers outperformed the competitors in the commercial cleaning equipment market. A year into the program and the top management is amazed at the lack of scrubber related service issues when compared to the scrubbers they'd previously bought. Replacement parts, ordering, shipment and service calls have all been streamlined for the grocer by switching to Tomcat Commercial Cleaning Equipment with a centralized process. With less than half of the grocery stores owning a new Tomcat auto scrubber, the customer's savings will continue to grow as the older scrubbers are traded in.

Tomcat floor scrubber and floor sweeper products are built by the R.P.S. Corporation based in Wisconsin since 1986. Tomcat is a world-leading manufacturer of floor scrubber, floor sweeper, floor scrubber-sweeper, as well as orbital scrubber machines for the commercial sector. We manufacture walk behind and rider models of our machines to maximize operator ease. We are known worldwide for our quality, durability, and our performance due to our walk behind and ride on machines being able to outperform, time and time again.

The floor scrubber, floor sweeper, floor burnisher, and orbital scrubber models we manufacture fit a niche in the commercial floor cleaning equipment industry that we pretty much invented: battery powered, high-performance, compact floor sweeper and scrubber equipment for commercial applications. Our scrubber and sweeper machines continue to be exceptionally well received, and are the reason we can claim to be the fastest growing commercial floor equipment manufacturer in this business.

We've built our reputation by providing the toughest, best engineered, highest-value machines our industry can produce. We make sure that in every market in which our more than 250 distributors in 36 countries and service centers do business, they maintain a "factory" trained service department with a vested interest in our customers long-term satisfaction.

Tomcat offers a line of cleaning equipment that includes sweepers and scrubbers, in both walk behind and ride on models. All our models are practical, rugged machines that are sensibly priced. Your local dealer will be happy to assist you with rentals, soap, and floor sealer information. They will gladly provide service on all brands of cleaning equipment.